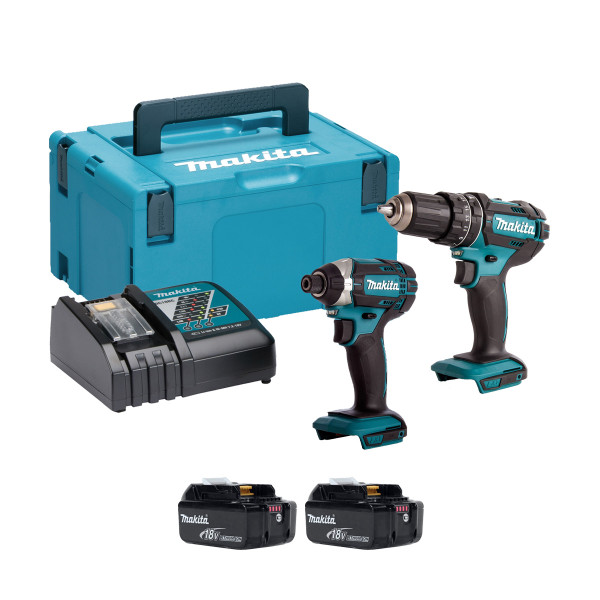 The Makita DLX2131J features the DHP482 combi drill with hammer and 21 torque settings plus the DTD152 high speed impact driver with a huge 165Nm of maximum torque.

This well balanced combi features a variable speed trigger with forward and reverse and an impressive maximum torque of 62Nm, the 2 speed gearbox has metal gears and an electric brake stops rotation almost immediately once the trigger is released. Twin LED lights illuminate the work area and a single sleeve 13mm keyless chuck allows for rapid bit change. Drilling capacities are 13mm in masonry and steel, 38mm in wood and a 21 stage torque setting allows for accurate screwdriving in both high and low gear. Being part of the Makita Lithium-Ion family it can accept all 18v Li-Ion batteries from 1.5Ah to 5Ah and incorporates a battery protection circuit to prevent overload and overheating. A rubber moulded handle gives better grip and reduces vibration and a handy belt clip can be fitted both left and right handed.

Lightweight and well balanced this unit is ideal for single handed use and features a rubberised grip for superior control, twin LED lights illuminate the work area and a ¼" single sleeve chuck allows for rapid bit change. The variable speed trigger is ergonomically positioned with the forward/reverse lever easily accessible by the thumb and forefinger. The electronic brake stops rotation almost immediately the trigger is released and being part of the 18v Lithium-Ion family this unit accepts all Li-ion batteries 1.5Ah to 5Ah and has built in battery protection to protect from overload and high temperature. The DTD152 has a high maximum rotation speed of 2,900rpm and fixing capacities of M5-M16 bolts and will comfortably drive large screws into hardwoods without pilot drilling.

PLEASE NOTE: If you select a 'Body Only' tool, it does not come with batteries, charger or a case.

*By completing this form you are signing up to receive our emails. You can unsubscribe at any time.