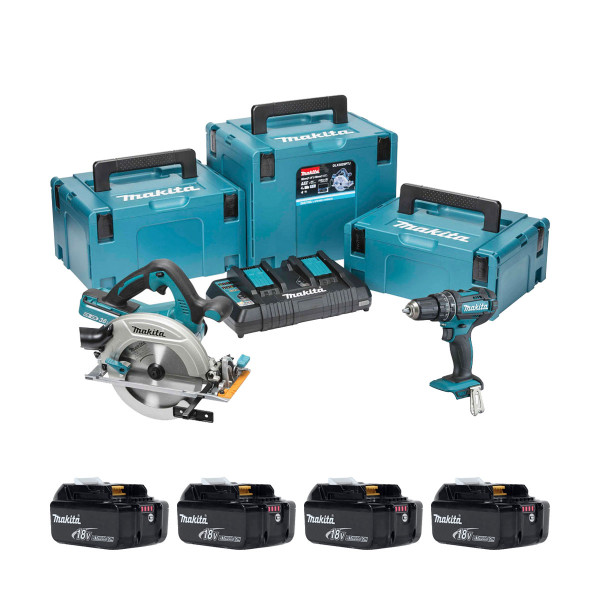 The Makita DLX2140 is the perfect twin pack for the carpenter or general builder featuring the DHP482 combi drill and the DHS710 twin 18v circular saw.

The Makita DHP482 is a cordless combi drill packed full of features. It is a mid-range, well balanced combi drill featuring a variable speed trigger with forward and reverse and an impressive maximum torque of 62Nm. The 2 speed gearbox has metal gears and an electric brake stops rotation almost immediately once the trigger is released. Twin LED lights illuminate the work area and a single sleeve 13mm keyless chuck allows for rapid bit change. Drilling capacities are 13mm in masonry and steel, 38mm in wood and a 21 stage torque setting allows for accurate screwdriving in both high and low gear. A rubber moulded handle gives better grip and reduces vibration and a handy belt clip can be fitted both left and right handed.

The Makita DHS710 is first in its class, a 190mm circular saw powered by a 36v DC motor fuelled by 2 x Makita 18v batteries making it as powerful as a corded circular saw. Weighing just 4.7kg, it is lighter than a corded tool and features the same depth of cut of 68.5mm. Features on the DHS710 include a soft grip handle for superior grip and control, excellent balance and a blower that keeps the cut line free of dust and debris. The saw has a depth adjustment and bevel angle of 0 - 50° with a positive stop at 45°. The blade cover has a rear dust exhaust for connecting to dust extraction units to prevent airborne dust.

PLEASE NOTE: If you select a 'Body Only' tool, it does not come with batteries, charger or a case.